A chat with Tammy McLeod of Davenports Law

Tammy McLeod is a Director of Davenports Law, and has specialised in the areas of trusts, asset protection and relationship property since 1999. The new Trusts Act 2019 is coming into force in January 2021, bringing many new changes to trusts law as we know it. In this interview, Channel Mag's Aidan Bennett talks to Tammy about what the changes mean and what those with trusts need to be doing to future proof them.

AIDAN BENNETT: Tammy, can you give us some background on what a trust actually is and why I might need one.
TAMMY MCLEOD: People set up trusts for myriad reasons, but mostly to protect their assets against an outside influence. Those outside influences could be business risks, relationship property claims or family protection claims in the event that you want to treat your children differently when you die. People also set up trusts if there are special circumstances that need to be considered when passing assets on to their children (e.g. children with addiction problems or relationship issues), if there are assets they want to be kept in the family for future generations, or sometimes for tax planning efficiencies. Trust assets are transferred to trustees who then hold those assets for the beneficiaries, who are the people that will ultimately benefit from the assets.

AB: Can you give us a little background on the current trust law?
TM: Trusts have been around since the days of the crusades, when the knight would leave his castle in the hands of his next door neighbour to look after for his family in the event that he didn’t return. From that stage the courts of equity (or fairness) dealt with trusts and how they were managed. In 1956 the New Zealand Parliament enacted the Trustees Act 1956 and that Act, together with case law, has managed trusts in New Zealand until now.

AB: Why have we got a new Act?
TM: The purpose of the new Act is to make trust law more accessible, by codifying the law and making sure everyone can understand their responsibilities and rights under the Act. I describe the new Act as an evolution, rather than a revolution, as many of the perceived changes are actually existing case law, which is now being put into statute.

AB: What do you think are the biggest changes to the law that come into force in January?
TM: The biggest change in the new Act, and the one that is the most talked about, is that beneficiaries have increased statutory rights. Beneficiaries aged 18 and over have the right to be notified that they are beneficiaries, and be told who the trustees are so they can hold them to account. They are also entitled to copies of the trust deed and any variations, information about the assets and liabilities, trust financials and information regarding the administration of the trust.
Under the new Act there is an increased responsibility on trustees to carry out their duties properly, and greater accountability to the beneficiaries. The new Act also divides trustees’ duties into two broad types: mandatory duties,­ which you cannot contract out of, and default duties that apply unless your trust deed says otherwise. The mandatory duties include understanding the trust deed, acting in the best interests of the beneficiaries and accounting to the beneficiaries.
The default duties, which can be modified, include that the trustees must act unanimously, that the trustees must invest trust assets prudently and that all trustees must hold core documents. It is important to check your trust deed in light of the new Act to ensure that the trustees are complying with the mandatory duties and to see if the default duties need to be modified.
The new Act also extends the time period for trusts from 80 to 125 years. This has come about due to increasing life expectancies and people wanting to hold assets in trust beyond one or two generations. The new Act also makes it compulsory to remove incapacitated trustees. This is a welcome change to the current system which, if the trust deed is silent, requires an application to the Court to remove an incapacitated trustee.

AB: So, what should people who have trusts be doing?
TM: The new Act is a timely reminder of change, and the need to move with the times. It is important to review existing trust structures and accompanying documents to make sure they comply, are doing the job you want them to and are fit for purpose. In particular, people should be reviewing the terms of their trusts and who the beneficiaries are. There are often ways we can change existing structures to ensure that they are actually doing their job.
While not part of the new Act, it is timely when reviewing your trust structure to consider your will and any wishes you may leave to the trustees of your trust. Too often people sign these documents and then don’t look at them again. It is important to constantly review wills and wishes to ensure that they still reflect your wishes and give good guidance to those you leave behind. 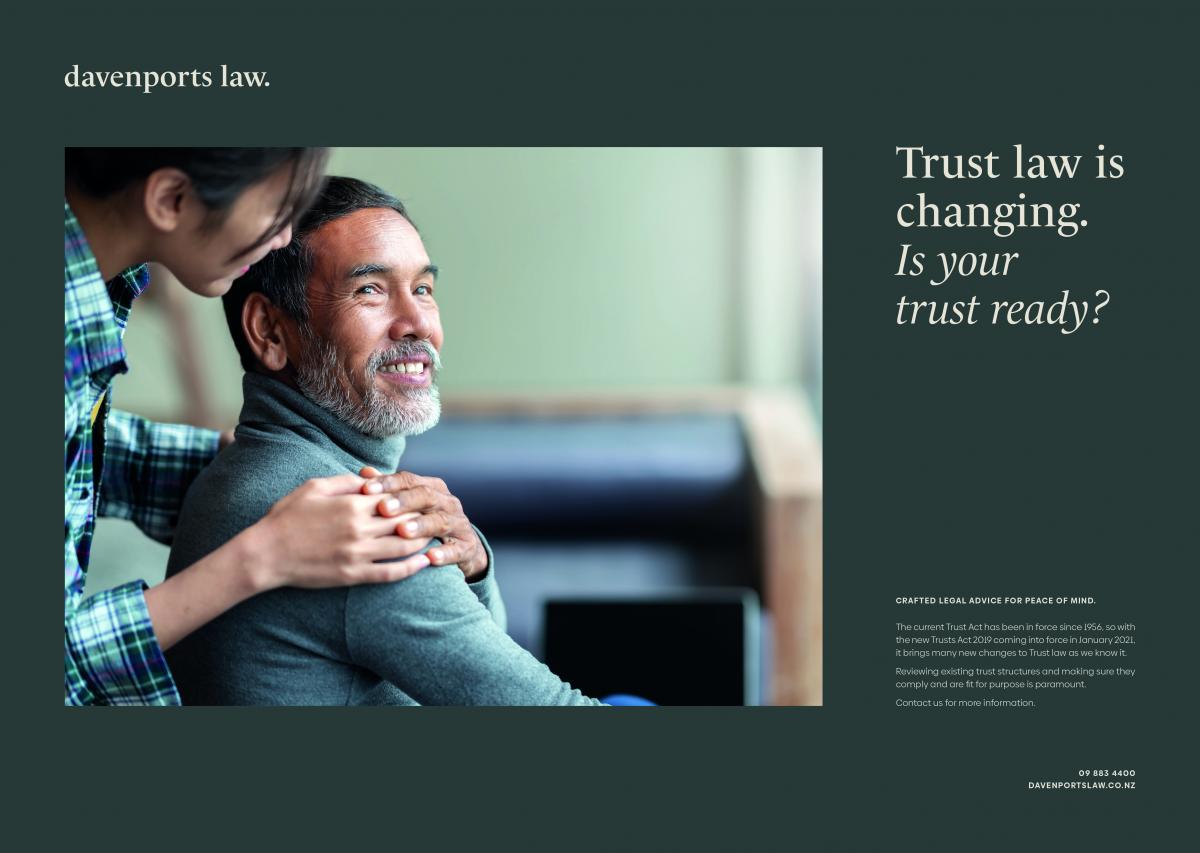