The Campervan, POSTPONED TO 2022 DUE TO COVID

Lisa, who lives in Northcote, is an actress, singer and writer, best known for her Logie-winning role as Claire Mcleod in Mcleod’s Daughters, as Chelsea in the iconic Kiwi series Gloss, and most recently on Shortland Street. A regular with Tadpole and Auckland Theatre Company, Lisa is thrilled to be back with her Tadpole family, working on her second hilarious Kathryn Burnett play and being directed by Simon Prast again.

Andrew’s career as an actor began in the 1980s, on London’s West End as well as in TV dramas and feature films, and working alongside Robert Redford in Spy Game. Since emigrating to New Zealand and now living in Campbells Bay, Andrew has rapidly built up an impressive collection of screen credits including The Brokenwood Mysteries, Shortland Street and Outrageous Fortune as well as many stage performances, the most recent in the acclaimed  Nightsong production of Te Pō at the Bruce Mason Centre.

Growing up in Devonport and Bayswater, Kathryn Burnett is an award-winning screenwriter and playwright. Her name can be found on many successful TV series including the recent TVNZ tele-feature The Tender Trap; black comedy Fresh Eggs, Black Hands; The Strip, and award-winning children’s sci-fi  drama series The Cul de Sac. Her most recent TV work includes the soon-to-air My Life is Murder starring Lucy Lawless, and rom-com Under The Vines starring Rebecca Gibney.

Simon Prast is a director and actor who was the founder of the Auckland Theatre Company in 1992 and director of the first Auckland Festival AK03.

From Gloss to The Gulf, from 12 Angry Men to To Kill A Mockingbird, Simon will be a familiar face to many. He recently completed the world premiere season of Shane Bosher's new play Everything After and can currently be seen in the new political satire Talkback, now playing on TVNZ On Demand.

The script of The Campervan is cleverly relatable to so many life events…. Forget the mid-life crisis – welcome to the full blown 60th birthday meltdown! A comedy about the absolute havoc that can be caused by good intentions, combined with the realisation that time is catching up with what we might want to achieve in life. Successful businessman Hugh and his younger second wife Tamsin live a life of luxury. But when Hugh decides something is missing and he wants to give away his millions as a legacy to a good cause and live in a caravan, the family wheels are bound to fall off…….

Be sure to book early for this premiere production, which will be on stage for a limited season only at The PumpHouse Theatre, 2 Manurere Ave. Takapuna. Bookings www.pumphouse.co.nz or phone (09) 489-8360 Early Bird booking discounts close August 25th. 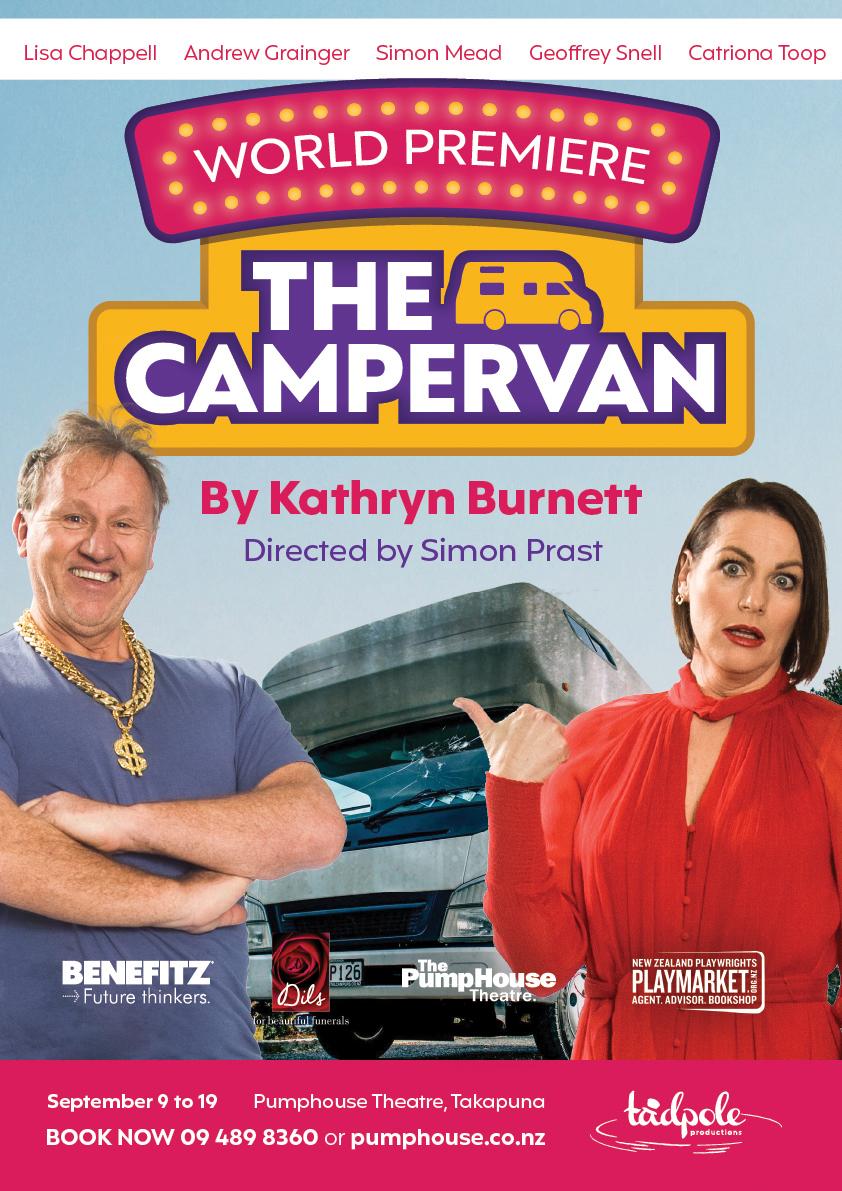