This year marks the 75th anniversary of the end of World War 2, when more than 200,000 New Zealanders served and almost 12,000 never returned home.

On 2 September 1945, the signing of the surrender of Japan marked the official end of one of the most deadly conflicts in human history.
New Zealand paid a high price as a country, with the highest per capita death toll of any current Commonwealth nation, and the horrors of the war lived on for many of those who returned. Amongst the tragedy of war, stories of New Zealand bravery and courage are not hard to find. The legacy of those who served lives on in all of us, and we respect and uphold the principles they fought so hard for.
This year I’d like to highlight World War 2, and those brave New Zealanders who took part in it. There are many North Shore heroes who served with exceptional valour during their time in the war, and we remember their service.
These are extraordinary times that mean that coming together on ANZAC Day as we usually would is impossible, but we can still all take some time from our day this 25th April to reflect on those who gave so much.

Remembering those who served

Just as WW1 touched every family, school, business and community all over New Zealand so too did WW2 make a big impact on the North Shore.
Many local families lost loved ones in the war. Lieutenant Peter Lindsay Horrocks was a foundation member of Takapuna Grammar School, and served along with his three brothers, two of whom never returned, and his uncle Lieutenant Robert Frater, who was the first New Zealand officer reported killed in Gallipoli in April 1915.
Both brothers who died received the Military Cross, which was awarded for “acts of exemplary gallantry during active operations against the enemy”, and Horrocks received the New Zealand War Service Medal — the first distinctively ‘New Zealand' service medal. When he passed in 1988 his ashes were scattered at sea from Milford Beach, where he grew up.
Other stories of those who gave their lives are tragically too common, like Flight Lieutenant Charles Anthony Armstrong of Devonport, who was killed in action during air operations. He was awarded the Distinguished Flying Medal, for “exceptional valour, courage or devotion to duty while flying in active operations against the enemy". Armstrong was also mentioned in despatches, where officers reported exceptional conduct to their high command. His loss was a tragedy for our community and his mother who lived on Vauxhall Road.
No reminder of the sacrifice of our community is more poignant than the Devonport Memorial Drive and its 62 white crosses representing all the men from Devonport who lost their lives during WW2.

Another way to honour relatives that served is to wear their medals at commemorations. Medals were awarded to all those who served in WW2 as a token from a grateful nation. Medals are worn with pride every year by veterans and descendants of those who have passed. Replicas can be ordered at www.nzmedals.com.

If you’re wearing someone else’s medals it’s important to observe the proper customs. Always wear the medals on the right side of your chest, as the left side is reserved for the original medal recipients. I’ve been proud to wear either my father's or grandfathers' service medals at commemorations both during my time as Minister overseeing our country’s WW1 commemorations and in our community as a member of our local Devonport RSA.

Thankfully, WW2 never made it to New Zealand shores, but signs of preparations can be found. Due to its strategic location, the North Shore became a critical part of Auckland’s coastal defence network.
In Devonport, you can visit historic North Head, which served as the administrative headquarters – ‘the nerve-centre for Auckland’s defence’. There’s an old gun battery, barracks, and a vast tunnel network that stored ammunition.
Of course, for greater awareness of our naval history, Torpedo Bay Navy Museum on Devonport’s waterfront is the official museum of the Royal New Zealand Navy. www.navymuseum.co.nz.

Requesting war records of a relative is easy, and for those who enlisted from 1920 onwards, the Ministry of Defence holds full records.
The best way is to fill in an application form for military personnel records, which can be found at www.nzdf.mil.nz/.
It’s helpful to have as much information as possible, such as middle names and a date of birth, as this makes it much easier to process your request.
I’ve found the records of my father who served in WW2 and my grandfather who served in WW1 this way. These records are a great way to learn more about your relatives and keep the memory of their service alive.

Doing her best to help those at the front during both wars earned Mrs Barnard the British Empire Medal. Not only did she bake tens of thousands of long-lasting Anzac biscuits and support Red Cross fundraising, she also waved farewell to six of her sons. Two of them never made it home.
To make her original version of the Anzac gingernut biscuit, simply warm 2 cups of golden syrup in a pot, then mix in these ingredients: 3 ½ cups plain flour, ½ cup softened butter, 1 ½ cups brown sugar, 2 ½ tablespoons ground ginger. Shape the dough into little balls and place them close together on a baking tray. Press flat with the back of a spoon. Bake for 15 minutes at 200C. Enjoy the taste of the original very long lasting Anzac biscuit, perfect for dunking in a cup of tea. 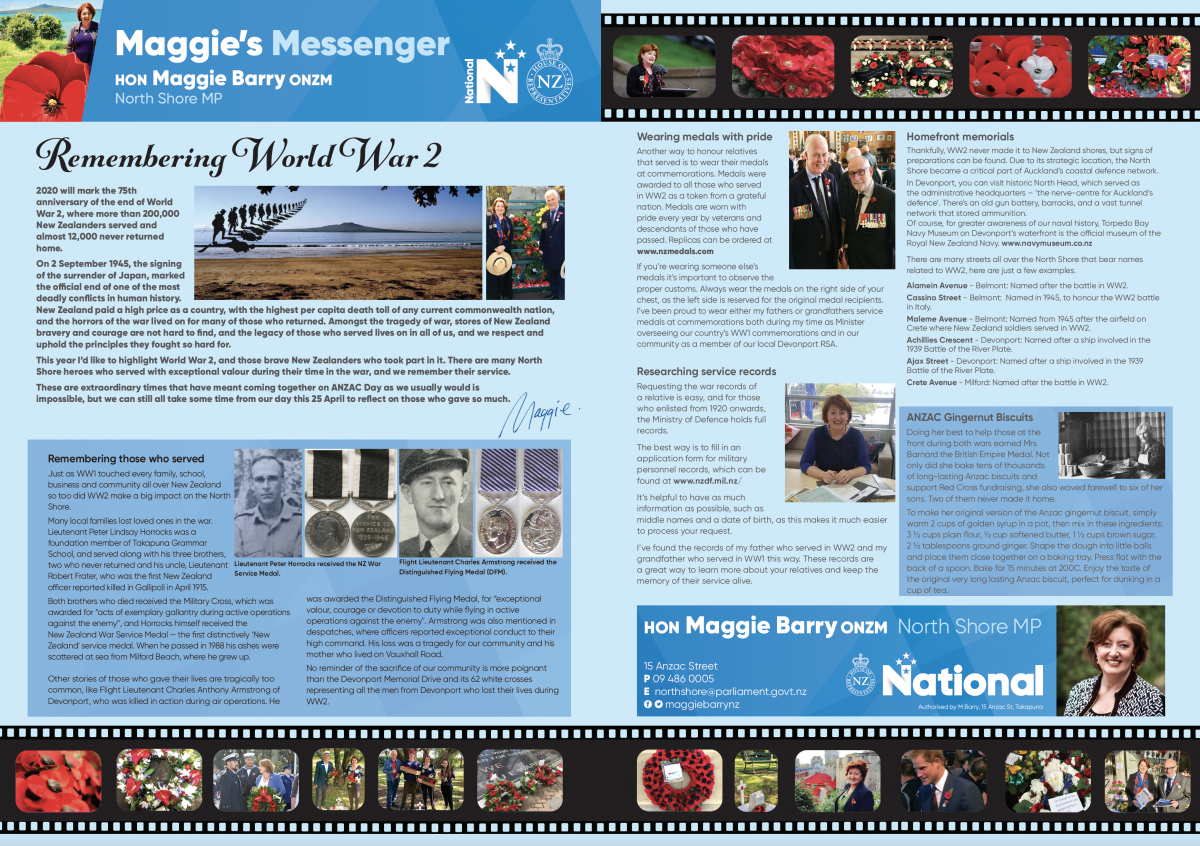