Spreading Out by Roger Hall

One show only – At The Pumphouse Theatre, 3pm Sunday August 9th

After so many cancellations and postponements across the entertainment industry it is time to once again celebrate the joys of live theatre in its many different forms. Tadpole Productions returns to the PumpHouse Theatre in Takapuna on Sunday 9 August, with a 3pm “one show only” play-reading of Roger Hall’s “Spreading Out”, directed by Janice Finn. There will be a question and answer session with Roger, Janice and the cast after the show.

In this hilarious and poignant sequel to the sell-out season of “Middle Age Spread” that Tadpole staged in 2019, some of the original cast will be reprising their roles for the read-through. The cast includes Anna Baird, Barry de Lore, Scott Harding, Rachale Davies and Tama Jarman, with Ashley Wallace making her Tadpole stage debut alongside her mother, Louise Wallace.

“Spreading Out” is a comedy, but at times runs ruefully close to the truth of ageing, with deeply familiar caricatures and the wonderful one-liners Sir Roger is renowned for. A moving examination of family dynamics across generations and the effect each individual unknowingly has on the other. We have “known” all these people, discussing them and their recurring issues at dinner parties and in supportive telephone conversations over the years.

Don’t miss this once-only chance to attend a read-through of “Spreading Out” with a wonderful cast, in the beautiful PumpHouse Theatre by the lake. (And the French Rendezvous café next door to the theatre is perfect for lunch or afternoon tea before the show.) 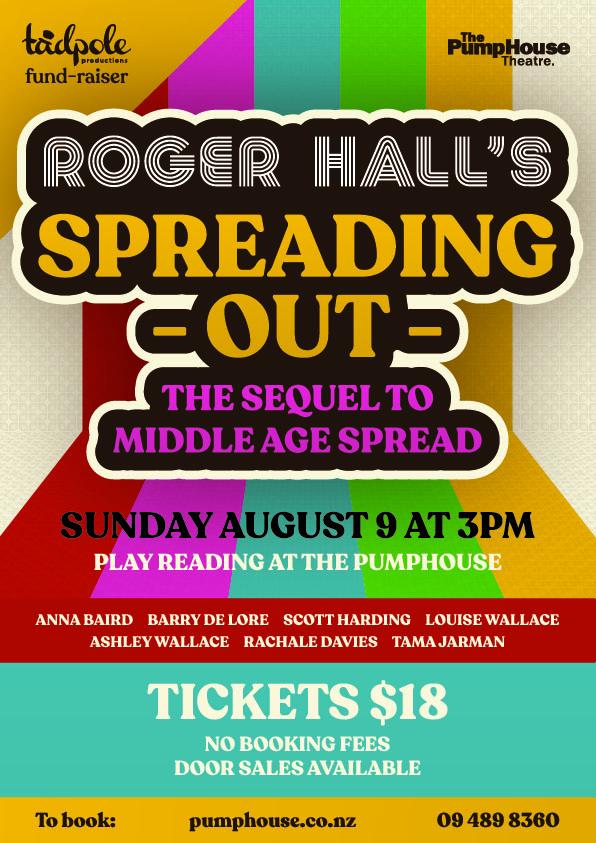